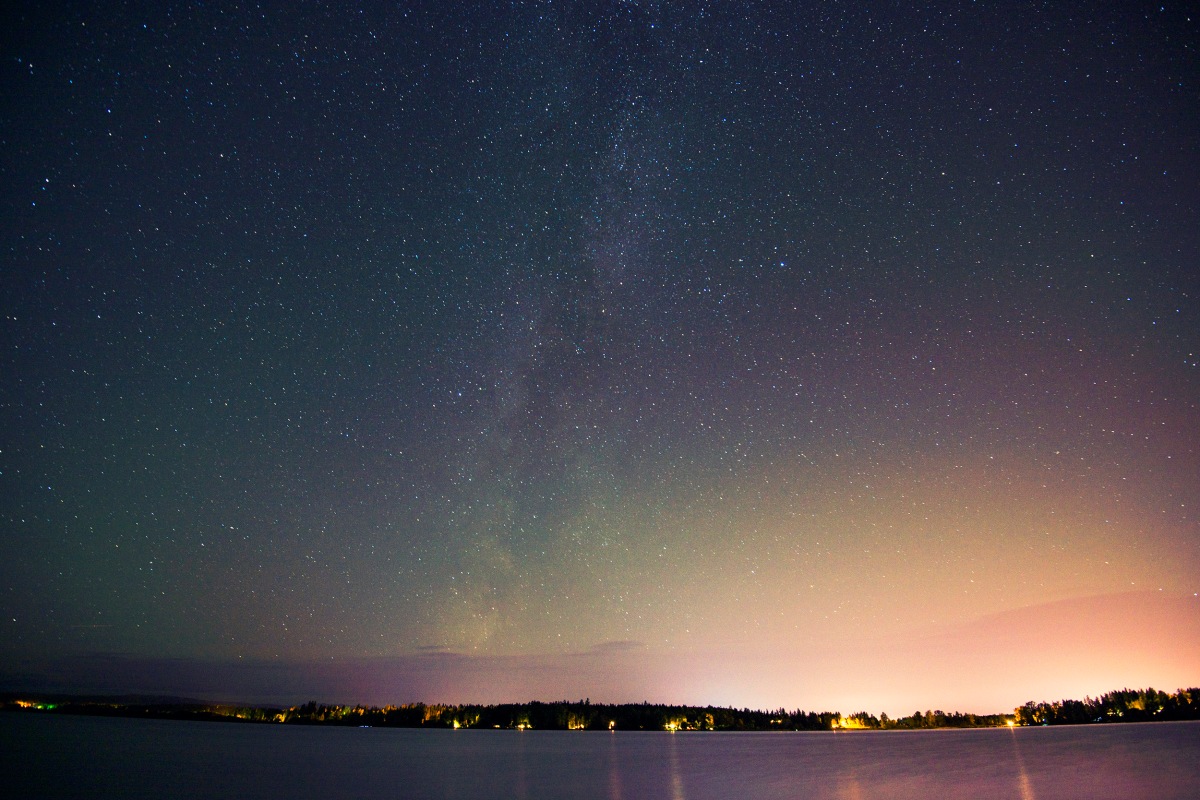 It’s still Thursday where I am, so I guess I get to do a Throwback Thursday! This one relates to something that happened two years ago, that impacted on me today. Back then I was going out a lot at night to shoot. This one particular evening at the end of September 2014 saw me drive out along the Quesnel Hydraulic Road on an inky, crisp, cloudless night – the moon having set hours before.

First, I wandered into a field sporting a single tree and several irate and all-too-aggressive fiery-eyed bovines. (You try shining a flashlight into their eyes and see what happens.)

I saw some of the brightest shooting stars ever and then, at some point, lost my camera remote while outrunning a mad cow, vaulting a barbed-wire fence, or simply loading my camera gear back into the car at the end of the shoot.

These were the photos I shot that night:

But how does it relate to today, you may ask? Well, I took a drive out there again this afternoon, and stopped to take a photo of the same tree in the same field with (who knows if they are the same) cows. It wasn’t nearly as impressive in the daylight! As I was about to get back into my car, I thought how funny it would be to find my remote after all this time.

I looked at the spot I would have come through the fence, looked in the field a bit, and then, lo and behold, saw it lying at the edge of the main road – a dusty grey rectangle with faded Nikon logo.

Sadly, it doesn’t actually work anymore, but how’s that for cool anyway – finding it after all this time? 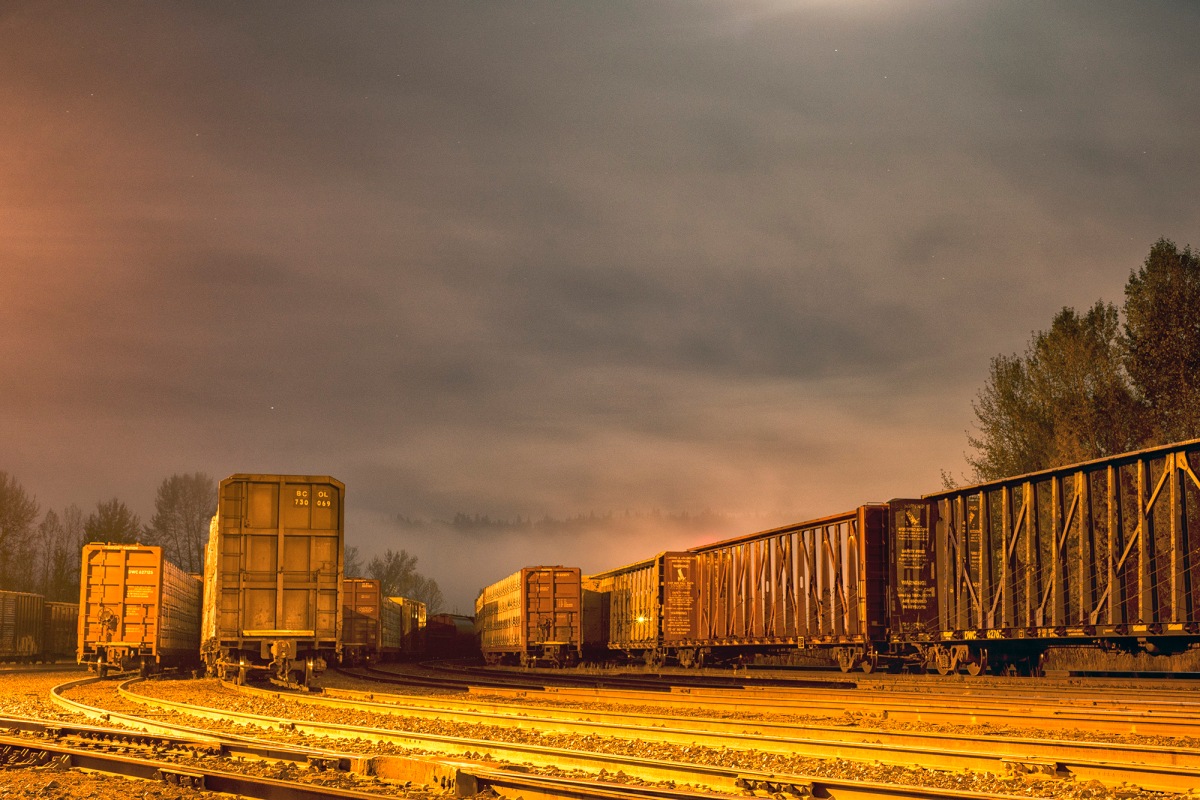 I know, I know, some of you have told me that “Throwback Thursdays” are boring, but I also know of at least one person who will enjoy this post from 2014, so here I go.

Back then I was really struggling with my health – my breathing in particular. This often kept me awake, my lungs rebelling, leaving me struggling to breathe. For a while I would lie in bed wheezing and coughing, until, in desperation, I would get up, dress warmly, grab my camera gear and head out into the night – into the “clean” air of this mill town of ours.

I shot the following over three nights – all between 10pm and 1am. One thing I discovered shooting at night is that one doesn’t tend to capture as many colours as during the day. But I learnt another important photographic lesson too – the value of a normal little flashlight. So, in these shots where you see graffiti standing out against the orange-browns of the train carriages, that’s because of the flashlight.

What else did I learn? When a cop stops to ask what you are doing, make sure you respond with confidence – as if you are exactly where you are meant to be. But when a train engine comes rumbling down the tracks towards you, confidence is pointless: make yourself scarce … and quickly.

Since I returned to Canuckistan in July this year I have been particularly healthy, and have not ventured out into the night even once. I also haven’t felt led to shoot much train graffiti. How grateful I am that I got all of these shots (and other night-time ones) back then! 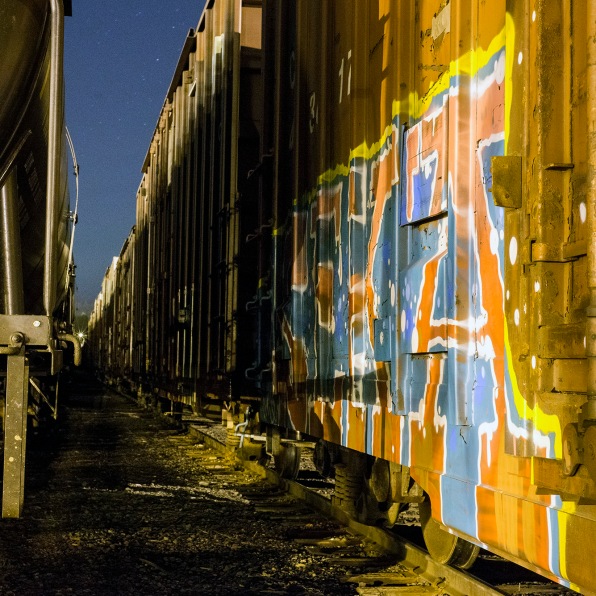 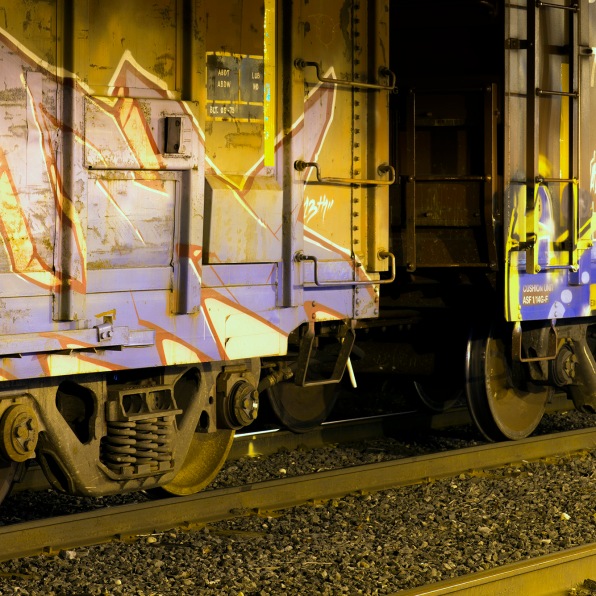 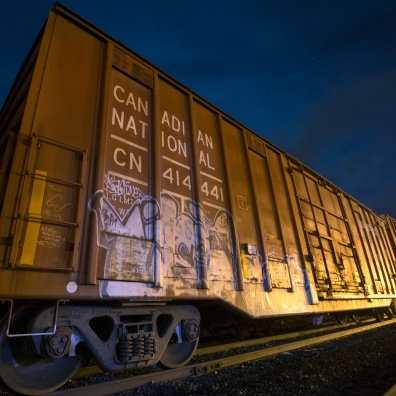 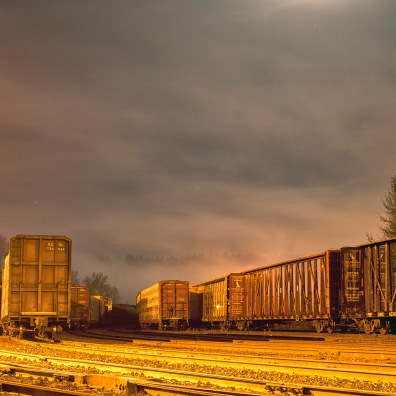 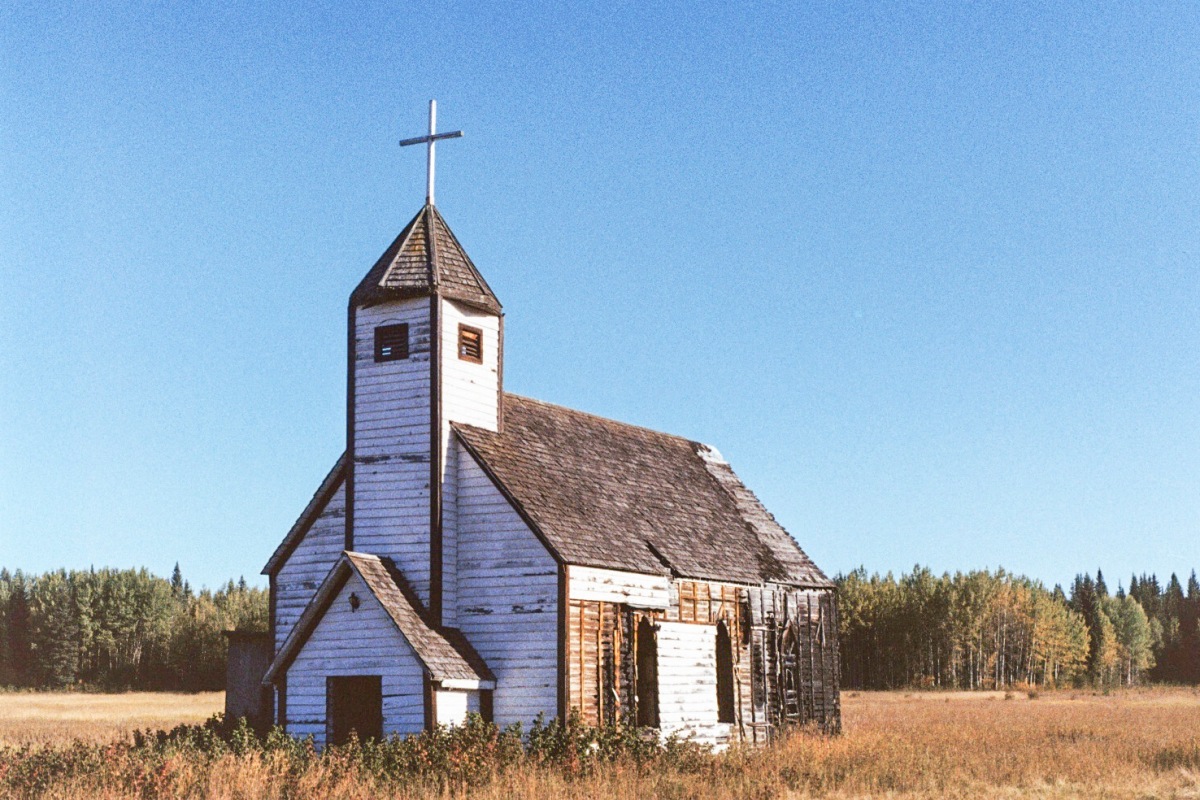 Back in June 2013 I did a blogpost on this gutted church that stands lonely in a field of dandelions out on Red Bluff Road, south of Quesnel, British Columbia. The light was perfect – pink and soft after a late afternoon shower – so I took a detour to try to photograph her. I turned off the main road down a pot-holed dirt track, and was met by two mangy dogs, which barked noisily at me – not used to seeing strangers in their neck of the woods. Literally.

But they were harmless, and I wandered around for at least half an hour – trying to do the old Catholic church justice with my photos. I imagined the stories she could tell – of families whose histories were intertwined with her own: of baptisms, weddings, funerals and Sunday services.

Interestingly enough, when it first caught fire, the local volunteer fire fighters went inside, only to find that there were no flames or smoke. It turns out that the part of the church one can see was simply built around the original structure, and that the double walls and double roof were keeping the flames on the outside.

When I returned to these parts in July this year I went over one evening to shoot her again, and was met with a sign with red letters: Private. And something about needing to get permission to enter. Perhaps my numerous visits in 2013 and 2014 had something to do with that. Of course, I ventured in anyway to see if I could find the right person to give me permission to shoot my favourite model. Once again, a few dogs announced my arrival loudly, and a young woman stepped out of a van or truck in a cloud of smoke, clutching a beer and a joint.

“You’re not allowed to be here,” said she. “You have to get permission from the band,” which, in these parts, means the First Nations or aboriginal ‘group’ (for want of a better word). And so I left, just a little bit dejected. Perhaps I will try to get permission from them at some point, but in the meanwhile I leave you these – my first photos of my favourite model.

(PS, when I blogged about it previously, I was told in no uncertain terms by a Canadian friend who lives abroad that I should  “be careful where/when you use the term ‘prairie’ while in Canada. As someone from THE Prairies, a small flat open space such as is shown in your photo does not qualify.” I decided to keep the name because it sounds poetic. My apologies to everyone from THE prairies to my east, including you “prairieplett.”)

This was one of the first blogposts I wrote after moving to Canuckistan in 2013. I thought it was worth revisiting (something I plan on doing every Thursday while I’m here – looking back at some of my blogposts from back then.) I’ve edited it slightly, but you will get the point …

So, before I moved over here I was told that everyone was absolutely charming. Of course, all Canucki adults are polite as punch, but I was informed that the teenagers and children were all most lovable too. And I do appreciate a disciplined, delightful youngster.

Since arriving at the beginning of the month I’ve experienced some strange phenomena, however. I’m not sure if these occurrences are caused by some until-now-repressed zombie gene (formed years ago by the foul-smelling stuff pumped into the air by the pulp mills) or just because everyone has had enough of my camera stuck in their faces …

But when I do try to photograph the kids, these are the results. One old chap informed me that I probably wouldn’t make it to winter at this rate. All I know is, I’m willing to die trying. 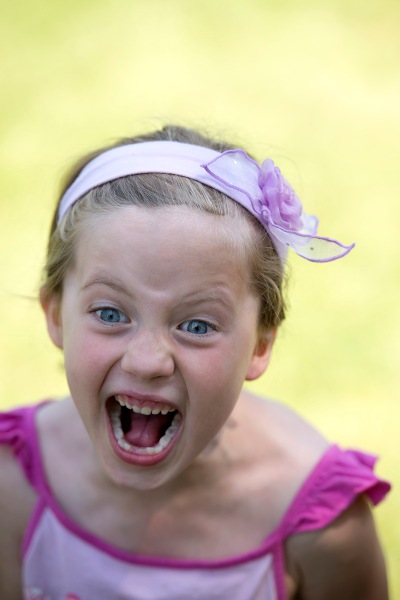 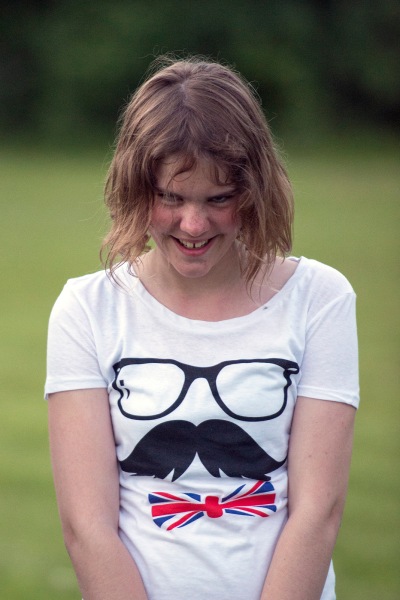 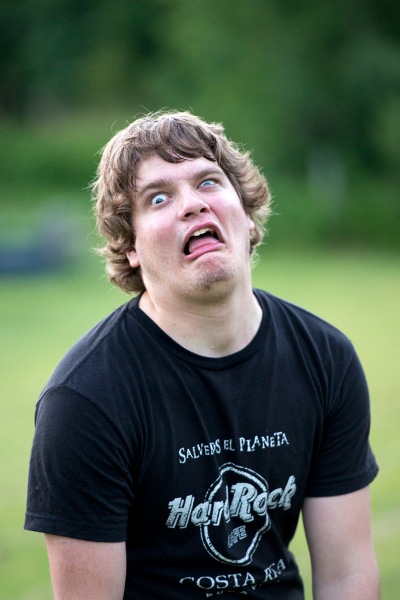 And finally, the cutest zombie of them all: 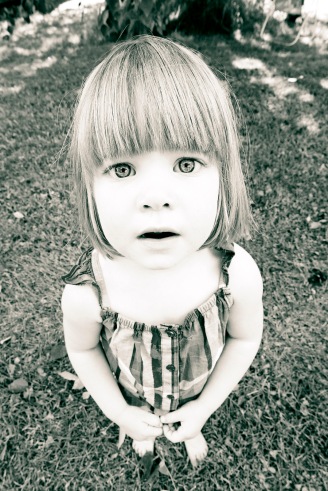